I am passionate about hugs, reading books, and family. Hugs in all forms are necessary to life ♥ One of my favorite hugs is reading. Any book regarding any topic, any time. ☺

When the Devil Drives
Christopher Brookmyre

This book was one I just couldn't put down. It is Justin's skill in weaving the lives of multiple characters together and opening windows of their lives that grabbed my attention. I'm drawn by the inevitable progression, guided by the puppeteer pulling each string, and knowing that there is no skipping to the end. Each step must pave the way. I just can't wait.

While looking for some examples of domestic discipline I found this book and just could not stop reading once I began the sample on Amazon. My emotions were fully engaged throughout and it was plain that both Katherine and Ryan had needs that were fulfilled by the other. I did not like that Ryan asked for a Safeword from Katherine and then ignored it but perhaps it will encourage others to be more careful. I don't always have to agree with the actions in order to like the book and I thoroughly enjoyed reading ">Hot Cooking Spanker Wanted by Rachel Burns

I like that the author was willing to write about women and children being kidnapped and tricked into sexual slavery and that the author used the story to promote awareness and support for the victims and their families. He touched on the harsh conditions, that religious or social status is not a deterrent, and that the victims may never truly recover even after being rescued. Jack Wilder told a good story.

What I will be looking for in the future from Mr. Wilder will be more depth. There were moments in this book where I could feel what the character was experiencing and will be impatiently waiting to be living between the pages barely remembering that I'm reading.

This Is Who I Am (Masters of the Shadowlands 7) I liked the way Linda took charge of her life as she explored changes she wanted to make in her life as well as learned to cope with the distress of her captivity. In conquering her own fears she helps Sam in facing his own.

I don't like when anyone blames or further victimizes someone who has and is already suffering as the victim of a crime and hope there are always (as in this novel) others who refuse to let it happen.

I can't wait for Cherise Sinclair's next book!
Tweet

The Cult of Me

I received a copy of this book free for an honest review from the author, Michael Brooks, through the Modern Good Reads group at Goodreads.
Tweet

The Witches of Jericho (Edenwitch #1) I received a copy of this book in exchange for an honest review from the author, Sam Hammack, through the Modern Good Reads group on Goodreads.
Tweet I just won a free copy of this book in exchange for an honest review from Kensington Books and Goodreads First Reads.
Tweet

I received a free copy of this book in exchange for an honest review from the author, S.J. McMillan, through the Modern Good Reads group on Goodreads.
Tweet

Ancient Blood: A Novel of the Hegemony

I received a free copy of this book for an honest review from the author, Brian McKinley, through the Modern Good Reads group on Goodreads.
Tweet 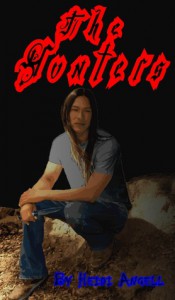 I received a copy of this book in exchange for an honest review from the author, Heidi Angell, through the Modern Good Reads group on Goodreads.
Tweet It's hard to believe but I like this book even better than AFTERSHOCK, the first in the series. FREEFALL is about Sam Rutherford, who was barely mentioned in the first book and Owen Jackson who had a more active role in the latter parts of both books. Unlike the first book which was mostly about the interactions of the characters during and after an earthquake, FREEFALL is about drug smuggling in Sierra National Park.

Uber fit action heros intermingled with heroines who could never be considered pushovers this action adventure comes complete with love, redemption and healing... but nothing is easy... or free.

I'm just waiting until the next book of the series comes out. In the midst of an earthquake... at the epicenter, nearly everyone remaining was dead. Of the few still there only two thirds survive but not without injury. This traumatic experience forces each of them face to face with themselves. Strong men and women; this battle for survival is not for the faint of heart.

I love how in the midst of tragedy love, passion and redemption are shown to be possible, but nothing is easy. Success is only possible for those who really want it and are willing to fight for what they want. I received a free copy of this book from Kaamna Bhojwani-Dhawan through the Modern Good Reads group at Goodreads in exchange for an honest review.

This book has an intro story leading into four different variations determined by the choices and who Charity McCormick meets along the way. At first I thought the characters would be the same and although Charity's choices would lead her in different directions the end would remain the same. This is not so. From wimpy to punishing and endings with 'happy ever after' to ??? kept me guessing. I have not previously read this style of book before and found I loved it. I will have to read it again in different orders to see if it makes a difference in my enjoyment of each of the stories.

This was fun and I plan on reading it and more of the Entwined series again.
Tweet I've been waiting for this book and found it for free today on Amazon. Check it out! ☻
Tweet

When the Devil Drives I've just won a free copy of this book in exchange for an honest review courtesy of Grove Atlantic and Goodreads First Reads.
Tweet It's so exciting! I won a copy of this book from Ania at Random House and Goodreads First Reads. Can't wait to receive it!
Tweet
next »